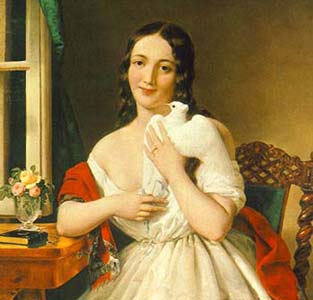 “Fly, fly, the pigeon of my post…And we will cut your wings…” – muttered viciously the haberdasher Bonacieux, scribbling a denunciation on D’Artagnan. However, pigeons were used as postmen long before the era of the French musketeers…

The pigeon, of course, is not a two-legged courier – you will not send it to any address. But to his native summer, this bird returns with incredible persistence, overcoming very long distances – up to 300 km. And individual, well-trained, carrier pigeons are able to find their homeland at a distance for more than a thousand of kilometers!

Add to this the absence of barriers and a solid speed (on average 60-70 km/h), and it will become obvious that in certain situations, when the mail delivery is especially difficult, pigeons became simply irreplaceable.

“Symbol of peace” in the war

Pigeons post was namely popular during the siege of cities when a daredevil managed to overcome the ring of enemy encirclement.

Pigeons were sent by both the Roman Decimus Brutus during the siege of Mutina by Anthony (43 B.C.), and the Dutch besieged by the Spaniards in the cities of Haarlem and Leiden (1570s).

But the first, seriously organized and regular, pigeon mail appeared in 1870-71 during the Franco-Prussian War, when the Germans took Paris into the ring. The besieged citizens first sent the news with balloons. However, the balloons were uncontrollable – it was possible to send them out of the city, but you couldn’t send them back to Paris.

It was then that the idea came to attract carrier pigeons. They were put in cages and sent on balloons through a chain of enemy troops so that they would come back with return messages. Although the first time out of 363 pigeons returned only 57, the it was worth it.

A pigeon is not a horse, so pigeon letters were written on very thin tissue paper, put in a bag, which was mounted on the back, tail or paw of a bird. Then they came up with a more economic way... 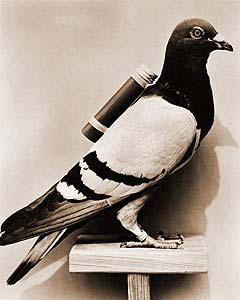 People brought letters to a special "pigeon" post office. There, texts were in small typographic type, typeset like a newspaper, and then photographed with a large reduction. As a result, many messages fit on a thin microfilm, which was placed in a capsule and attached to pigeons. At the place of receipt of the film, it was projected onto the screen, and special officials copied the texts of the messages. 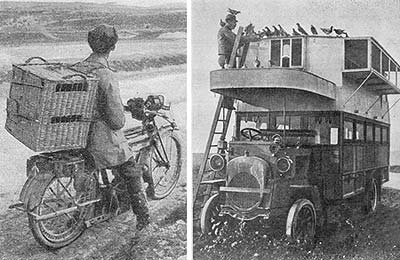 Now one pigeon at a time could deliver information with a capacity of 70 thousand words and bring to the state treasury 35 thousand francs from grateful post clients.


The Germans were said even to try to fight against the feathered postmen with hawks, but without much success.

Not without pigeons and in the fields of two world wars. They were especially actively used during the First World War. There were even entire bands of pigeon postmen, and for greater mobility traveling dovecotes were used. Accordingly, pigeons that were used to one dovecot were transported to another, with which they were going to keep in touch. Bearing in mind that war is war, the same message for reliability was sent immediately with three birds.

Of course, wired and radio communications gradually replaced the pigeons-postmen, but the birds continued being used during the Second World War. Researchers calculated that between 1941-45, it was sent about 15 thousand “pigeongrams”.

The most distinguished feathered military postmen were often awarded. So, the pigeon Cher Ami was honored with the French Military Cross in 1918. The Commando pigeons and the soldier Joe in 1945 were rewarded with the Deakin British Medal. The luckiest pigeon under the number "888" was even given the rank of colonel of the British Army, and after his death, he was buried with honors. 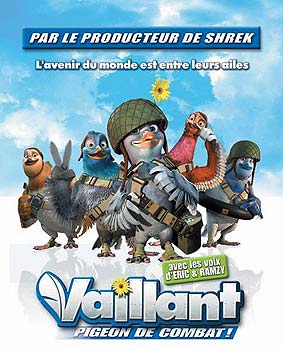 In 2005 the cartoon "Feathered Special Forces" about pigeons – participants of the Second World War –was shot.

Important advantages of pigeon mail were secrecy and, most importantly, the speed of delivery. Even the ancient Greeks sent pigeons with lists of the Olympic Games winners.

But the most vivid proof is the history of the famous financial empire of the Rothschilds. According to legend, it was thanks to the carrier pigeon that Nathan Rothschild was the first in Britain to know about the victory over Napoleon at Waterloo. This allowed him to conduct a successful operation with French securities and earn a fabulous fortune.

The pigeon turned out to be a good assistant to reporters. Until the radio had been invented, the editors received information about sailing regattas using pigeons, which were previously placed in the dovecote on yachts.
However, this method of transmitting urgent information was also practiced in 1962 by Reuters reporters, so the correspondents would not waste time standing in traffic jams.

Not always pigeon post served a legitimate and specious purpose. So in the time of Napoleon, when there was a customs war between England and France, pigeons often helped smugglers to transfer precious stones from the island to the continent. And now in the regions of Afghanistan and Pakistan, these birds are used as ... drug couriers delivering heroin.


“- “And they asked personally to hand it over,” said the pigeon-postman and put it on the recipient’s head.”

There were cases when carrier pigeons were the only way to deliver messages. For example, in distant sea wanderings. Even the ancient Egyptians took pigeons with them during sea voyages, and then it became a common practice among other sailors.

It was the pigeon that brought the latest news from the Swedish Arctic explorer Solomon Andre. In 1897 Andre, together with two satellites, rose in a balloon with Svalbard, desiring to reach the North Pole. Soon an encouraging pigeon message arrived – they said everything was fine – and after that nobody had heard anything about the expedition for the whole 33 years ... So far, the remains of the brave polar explorers have not been found on one of the northern islands.

Speaking of islands ...
In the second half of the XIX century, when there was no airmail yet, and the steamers were going slowly, the inhabitants of the islands remembered the pigeons. In particular, a man named Fricker – a resident of the island of Great Barbier, dissatisfied with the fact that the mail ship between the island and the New Zealand port of Auckland ran only once a week, decided in 1898 to create regular pigeon post.

As a result, letters began to be delivered on a daily basis. The fastest pigeon with the talking nickname Velocity could cover the distance between the Great Barbier and New Zealand (90 km) in just 50 minutes. The idea was so successful that even special forms and triangular stamps were established – the first postage stamps for pigeongram. 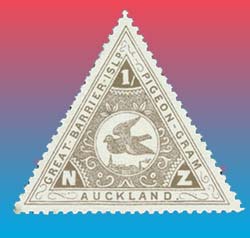 So in urgent matters, pigeon post can still come in handy. For instance, today in remote and inaccessible areas of England, pigeons are used for express delivery of blood samples to hospitals for analysis.