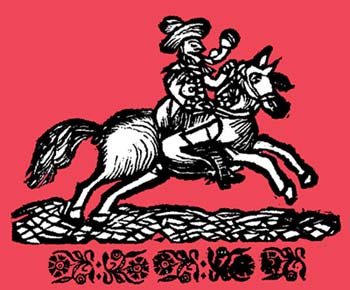 The history of postal delivery - Equestrian messenger (Germany, the 17th century).
At the end of the Middle Ages the postal delivery tended incredibly to be centralized and monopolized. This was true for both the state and individuals.

In France the founder of state post was considered Louis XI, the unifier of France and the first absolute monarch. This ""sly fox"", an insidious plotter and a brilliant diplomat is well known to everyone who read W. Scott's novel ""Quentin Dorward"". Of course, properly operating post was of the highest need for such a ruler...

In 1464 Louis XI issued a decree establishing the royal courier service and arranged stations on the roads where couriers could change horses. Thanks to spies and couriers, the king was always up to date with the latest events. So the news about the death of his arch enemy in 1477 – Charles the Bold (Duke of Burgundy) – reached Louis XI after 3 days. Exactly during this time his couriers were able to cover a distance of 450 km – from the place of Charles ‘death to the royal residence..

True that postal services were available only for the king and senior officials. Delivery of private mail could cost life of royal couriers.

Postal services in France were made public in 1598, thanks to another king, Henry IV, the husband of the same Queen Margot who was glorified by A. Dumas.

In 1627 postal country’s rates were unified. It was even allowed to transfer money (in the amount of not more than 100 livres), but the precious stones and metals were forbidden to put into envelopes.

In 1668 the French government decided that the profit from the post should go to the state treasury, and not to the pockets of the Postal College. However, after 8 years, mail was handed over for 1,200,000 livres per year. It is clear that the farmers immediately raised tariffs.

Interestingly, until 1653 the French post had not delivered local letters (even in Paris). It was changed by the Renoir de Villayer. Many of his innovations (mailboxes, shortcuts for payment, regular posting of letters) were so epoch-making that each of them deserves its own story.

In the meantime, let’s carry over to the territory of the so-called Holy Roman Empire, uniting the Germanic, Austrian, Dutch and many other lands of Central Europe. Such a diverse multinational formation required a strong and unified postal service. The problem was solved by the idea of Emperor Maximilian to invite Franz von Taxis.

In 1501 Franz became the general postmaster of the Netherlands, and 4 years later he undertook an extremely difficult task – to establish a constant postal connection between the Vienna residence of Maximilian I with the Netherlands and the royal courts of Spain and France. In fact, it was the first regular international post.

Rod Thurn-u-Taxis had been managing post from one generation to another for nearly 400 years! After a while, their postal services became available to non-titled customers. Apart from this, Taxis fought actively with competitors – city couriers and butchers' post, were convincing the emperor to ban the delivery of mail and the use of postal horns to ""unauthorized persons"" (however, without much success).

The history of Thurn-u-Taxis ended only in 1867 when the post was nationalized by the government of Prussia.

As for the UK, an important contribution to the postal affairs was made by a man named Robert Murray. In 1683 he organized the Penny Post and tried to monopolize the entire private mailing in London.

The name for the mail was not chosen by chance. Its main advantage was a single and – most importantly – a very low tariff for postal services. Within London all letters and parcels weighing up to 1 pound (454 grams) were delivered for a fee of just one penny.

Penny Post had another success when it was owned by the merchant William Dokvra.

It was he who set up the whole network of postal institutions throughout London. Namely – 500 receiving points where the mail was distributed among 7 post offices (one post office for each district of London). Mail delivery in the city was carried out 4-5 times a day (and in the central parts – 10-12).

The process was controlled by means of special stamps. When the client handed over the letter to the receiving point, it was stamped by a triangle. Three words went to the sides – “penny, post, paid”. The center of it was with a Latin letter indicating the location of the post office where the letter was sent from (for example, “L” – Lime Street, and “P” – the area of St. Paul’s Cathedral.

The Penny Post was so popular and profitable that it was soon nationalized and handed to the Royal Post of Great Britain.

By the beginning of the 18th century, the British post had an organized structure. Everything was managed by the General Post Office, as well as other major post offices in different parts of the empire – London, Edinburgh, Dublin, New York and even the West Indies.

However, only in the 19th century, post would be similar to modern one. New delivery vehicles, the invention of the postage stamp, the creation of the Universal Postal Union – we will talk about all this in the following articles.